KHAN YOUNIS, Gaza Strip (AP) — Ibrahim Slaieh can name three great moments of joy in his life in the Gaza Strip: graduating from college, getting married, and the day he got a work permit last year. six months inside Israel.

The permit – a small piece of paper, wrapped in protective plastic – allows the 44-year-old to work in a grocery store in southern Israel, earning 10 times what he could in Gaza. That means a better education for her six children, bigger family meals and treats like pastries, fruit yogurt and chocolate milk.

Without it, he would have to seek meager wages inside the narrow coastal strip, which has been under a crippling Israeli-Egyptian blockade since the terror group Hamas took control 15 years ago. With unemployment hovering around 50%, that could mean scavenging rubble from years of conflict or trapping birds to sell to pet stores.

“It’s incomparable,” says Slaieh. “A month of work there is equivalent to three years of work here.”

Israel acknowledges that permits are also a powerful tool to help maintain calm or – in the eyes of its critics – control. Israel has issued up to 15,500 work permits since last year, allowing Palestinians like Slaieh to enter the country from the Gaza Strip and work mostly in menial jobs that pay wages far higher than those available inside Gaza.

They are among the first Gaza workers to officially work in Israel since Hamas took control of the territory in 2007. More than 100,000 Palestinians from the West Bank have similar permits that allow them to enter Israel to work.

Palestinian men gather to apply for a work permit in Israel, at Jabaliya refugee camp in the northern Gaza Strip on October 6, 2021. (Mahmud Hams/AFP)

The permits give Israel a form of leverage over the Palestinians who rely on them – and over Hamas. Gaza’s de facto rulers risk blame if the border is closed and workers are forced to stay home – as they were earlier this month during the latest outbreak of violence.

Hamas, which openly seeks the destruction of Israel and which has fought four wars and countless small battles with Israel over the years, did not participate in the latest round of fighting – apparently in an effort to preserve permits and other economic agreements with Israel that have provided an economic lifeline to the territory.

Israel often describes permits and other measures that provide economic opportunities for Palestinians as goodwill measures. Critics see the permits as another means of Israeli control over the strip. Israel has no military or civilian presence in the Hamas-ruled enclave, having withdrawn in 2005. 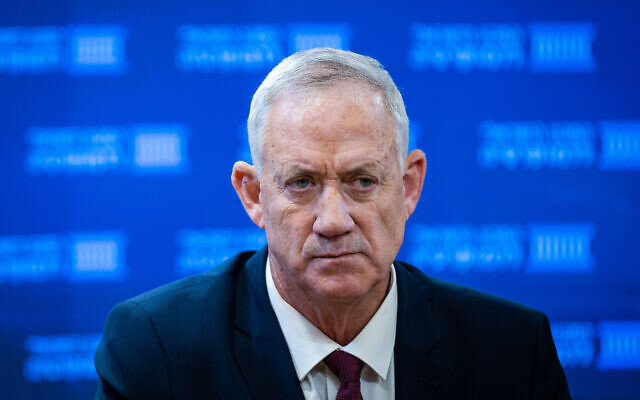 Defense Minister Benny Gantz speaks during a meeting of the National Unity faction at the Israel Democracy Institute in Jerusalem on August 23, 2022. (Yonatan Sindel/Flash90)

Maher al-Tabaa, an official with the Gaza Chamber of Commerce, says the permits have had little effect on Gaza’s overall economy, which remains heavily hampered by the closures. He says those working in Israel inject a total of just $1 million a day into Gaza’s economy.

Before Hamas took power in 2007, some 120,000 Gazans worked inside Israel. Almost all lost their licenses later that year. Since then, the population has doubled to around 2.3 million even as the economy has virtually collapsed.

Israel says the blockade is necessary to prevent Hamas from building up its arsenal, while human rights groups see it as a form of collective punishment.

Al-Tabaa said that only doubling or tripling the current number of permits would lead to economic recovery in Gaza.

One Sunday morning, Slaieh woke up before dawn, kissed his daughters goodbye and waved to his sons through a window as he drove down a dirt road, bound for the Erez Pass leading to Israel.

After crossing, he is sometimes picked up by his employer. Other times he shares a taxi to the southern city of Beersheba, about 40 kilometers (25 miles) away, with other workers. He spends three weeks in Israel before returning home for a week.

Before getting his permit, Slaieh said he had never been to Israel. 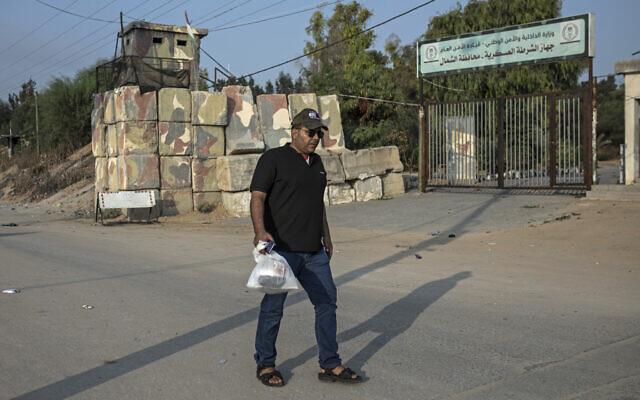 He has only recently started to learn Hebrew. He works in a store in Beersheba owned by a distant relative and says many shoppers are Israeli Arabs.

Like many workers in Gaza, Slaieh says he largely stays alone, partly to avoid jeopardizing his permit and partly because getting out is expensive. He meets occasionally with other Gazans or goes to pray at a local mosque.

Some of the permits are renewed automatically, while other workers must periodically renew their application. 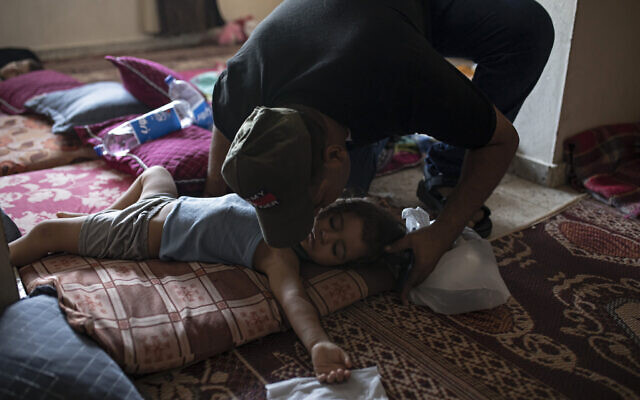 Palestinian Ibrahim Slaieh kisses his daughter in the morning before crossing to Israel for work in Beersheba, Khan Younis, in the southern Gaza Strip, August 21, 2022. (AP Photo/Fatima Shbair)

He says the prospect of not having his license renewed is “terrifying” and he’s already losing sleep over it. He says he saves as much as he can out of the roughly $75 a day he brings in from his job in Israel.

If his permit is denied, he says his only hope is to start a small business in Gaza.

He said his father didn’t save any money when he worked in Israel about two decades ago. When Israel largely closed the border in 2007, tens of thousands of workers, including Slaieh’s father, suddenly lost their jobs. Her father died six years ago.

“I don’t want my children to have the experience that we had,” he said.

ToI staff contributed to this report.

You are a dedicated reader

We’re really glad you read X Articles from The Times of Israel over the past month.

That’s why we started The Times of Israel ten years ago – to provide discerning readers like you with must-read coverage of Israel and the Jewish world.

So now we have a request. Unlike other media, we don’t have a paywall in place. But since the journalism we do is expensive, we invite readers to whom The Times of Israel has become important to support our work by joining The Times of Israel community.

For just $6 a month, you can help support our quality journalism while benefiting from The Times of Israel WITHOUT ADVERTISINGas well as access Exclusive Content only available to members of the Times of Israel community.

Thanks,
David Horovitz, founding editor of The Times of Israel