Chef and TV presenter Rosemary Shrager once struggled to afford food and clothes before she shot to fame.

Shrager – who has appeared in Castle Cook, Ladette To Lady, The Real Marigold Hotel and I’m A Celebrity – told Donna Ferguson she had a privileged upbringing in Regent’s Park in London but lost her inheritance and all his assets during the recession of the 1990s.

She went on to command six-figure sums for her television work. The 71-year-old will appear at Theakston Old Peculier Crime Writing Festival, which runs July 21-24. Her latest novel, The Last Supper, is now out.

What did your parents teach you about money?

They tried to teach me the value of money by keeping very little of it. My father was first a general manager, then entered the banking sector. My mother was a housewife, although when my siblings and I were young she employed a housekeeper and a nanny, and then we went to boarding school. She did a lot of cooking and baking and grew her own vegetables.

We lived in a beautiful house, designed by the famous Regency architect John Nash, in Regent’s Park in London. It was an absolutely beautiful place to live, the garden sloped down to the old canal. We had three houses – another overlooking Regent’s Canal and a very old house in Cornwall, which belonged to my mother.

Despite this, I had a Victorian upbringing and was kept very short of things. For example, my siblings and I had to wear our school uniforms during the holidays because we were short of clothes. I remember once being given a few pounds to buy panties – I couldn’t believe I had that money to spend. My mother was a delicate woman. I would worry about bringing friends home, because I didn’t know what mood she would be in.

So, even though it was privileged, I didn’t have a very happy family life. Eventually, my father left with the governess and my parents divorced.

Have you ever struggled to make ends meet?

Yes. I lost everything almost overnight in the 1990s. My husband and I had sold our house in London and he invested all of our money in houses in Cornwall. He redid them when interest rates jumped. He couldn’t afford to finish the project.

The bank took everything from us. I had to sell all the land I inherited from my father to pay for everything. It got to the point where I couldn’t afford to buy food, clothes and everything else.

My husband never got over what happened to us and we separated. Even now, 30 years later, I find it hard to talk about it.

What scares me is that interest rates will skyrocket again and I’m sure there will be another recession.

How did you turn things around?

I went back to London and started trying to make some money. I’ve always worked as a chef because I loved the industry.

But now, rather than working because I liked it, I had to work to have a roof over my head. I lived in the guest rooms of three different guest houses, over a period of about four years.

I worked myself silly, cheffing all over different restaurants. Cooking was my life.

Have you ever been paid stupid money?

Yes. I was doing a TV show and the production company wanted to keep me exclusive. So in the late 1990s I was paid £10,000 for agreeing not to do another TV show with another production company. It was ridiculous.

What was the best year of your financial life?

That was in 2001, thanks to my TV series and my book, both titled Castle Cook.

I also did fun game shows. Television paid a lot of money in those days. You would get £30,000 just for a week. Also, I was head chef at Amhuinnsuidhe Castle in Scotland.

I’ve made more money since, but it was the first time I made six figures, so I consider it my best year.

What’s the most expensive thing you’ve ever bought for fun?

Two handmade fiberglass plant pots for £2,000. They are on wheels so I can move the trees planted in them around my yard. It was an incredibly extravagant purchase, but I love being able to move huge trees. 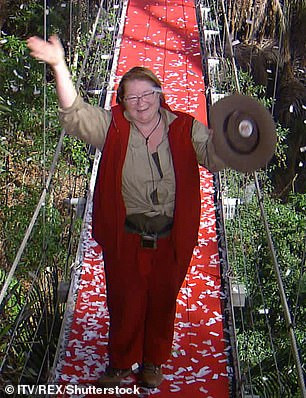 Queen of the Jungle: Rosemary as a contestant on I’m A Celebrity in 2012

What is your biggest financial mistake?

Not using that £10,000 check I was given for a down payment on a house. I rather wasted the money for my family.

I don’t regret selling my land or my house during the recession. I made it for my husband because I loved him. Now I have everything I need again, thanks to hard work. I always tell people: never look back. You can’t change what happened in the past, but you can change the future.

I bought my house three years ago. This is an apartment in a converted chapel in East Sussex. I renovated it to be exactly as I wanted it, with an office, two bedrooms and a kitchen studio where I do cooking demonstrations.

I’d rather not say how much it’s worth, but I spent £100,000 on it and think it’s gone up in value by at least that much. I plan to stay here for the rest of my life. At my age, you need security.

Do you save in a pension?

I started saving in one when I was 50. Now I get it, along with my state pension and half of my late husband’s state pension. He didn’t leave me a penny when he died, and I didn’t expect him to because he had nothing. So I can’t tell you how excited I was to find out that I was entitled to half his pension.

Do you invest directly in the stock market?

No. I always thought I never had enough money to do this. I bought Stellars, which is a cryptocurrency. They have completely lost value. They hurt your neck.

What is the only little luxury you give yourself?

If you were Chancellor, what is the first thing you would do?

I would fund kitchens in all secondary schools to teach cooking and make home economics classes compulsory from the age of 11.

I think that would help with the obesity crisis. I’ve met so many kids who think the chicken comes out of a piece of plastic.

What is your number one financial priority?

To make sure I have enough money for my future and be able to leave everything I have to my children.