Switzerland is anchoring the European and Middle Eastern expansion of one of the fastest growing cryptocurrency exchanges in the world.

Bermuda-based FTX Group is building its regional headquarters on the foundations of a small but successful Swiss company that was established just two years ago.

Like many projects I come across in the Swiss “Crypto Nation”, digital assets have come together in record time, riding the rising value of bitcoin.

From the office of his law firm in the canton of Appenzell Ausserrhoden in eastern Switzerland, Patrick Gruhn stumbled upon the profitable business of cryptocurrency consulting during the bitcoin boom in the middle of the last decade.

The law firm changed its name to Crypto Lawyers in 2018. Gruhn and his fellow crypto advocates then came up with the idea of ​​turning the company’s shares into digital “tokens” for a new era of blockchain trading.

And that’s how Digital Assets was born in July 2020. It soon struck partnerships with FTX (which specializes in crypto derivatives) and the even bigger exchange, Binance – both of which were exploring ways to create and to trade a wider range of digital assets. 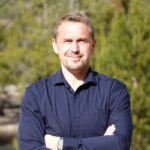 “A lot of people back then were asking for big things, but few delivered,” Gruhn told me. “We’ve run our business for over a year without any problems and have proven that token corporate actions can work.”

FTX has now taken over the business, moving it to central Switzerland and retaining key personnel, including Gruhn as head of the renamed FTX Europe.

Gruhn plans to hire around 50 people in Switzerland by the end of the year and wants to obtain licenses to build a commercial platform in the Alpine state. It is already authorized to operate from Cyprus through a partner investment company.

“Our assumption is that in two or three years, we would expect 35% of the group’s trading volume to come from Europe,” says Gruhn. FTX Group’s global trade has exploded in recent months to reach a daily volume of around $14 billion.

As soon as the new Europe and Middle East division of FTX was announced, it reached a major milestone. The awarding of a virtual asset exchange and clearinghouse license in Dubai has extended FTX’s reach to one of the world’s leading cryptocurrency hubs.

The UAE is moving swiftly and ambitiously to capture a large chunk of the global cryptocurrency and digital asset market.

Europe may prove harder to crack. Britain bans trading in crypto derivatives to the general public. A number of crypto exchanges have unsuccessfully attempted to enter the Swiss market. The financial regulator imposes heavy licensing requirements on budding exchanges.

Gruhn’s company, Digital Assets, should not be confused with US tech giant Digital Asset, which entered the Swiss market in 2016 by taking over the small Zurich-based company Elevence Digital Finance.

This “digital asset modeling language” (DAML) has become an integral part of the digital asset success story and is used by companies like the Australian and Hong Kong stock exchanges, Goldman Sachs and BNP Paribas.

It just goes to show that Crypto Nation Switzerland is not just about foundations and lawyers – it also plays a role in developing technological innovations.